One Voice for Christians

The Oriental Christians (or Middle Eastern Christians) are weak for a lack of designation, identity, and, hence, representation. The Ecumenical dialogue has to go on and will take time, may be generations. But the Middle Eastern Christians don’t have the luxury of time. If nothing major and effective is done immediately, by combining the available statistics exponentially, the region will reach the 0% (zero percent) of Christian population before the year 2035.

"One voice for Christians" is not another organization to defend the rights of persecuted Christians. It's actually an initiative by the Royal House of Ghassan to create a multimedia platform addressing the imminent exodus and extinction of Christians in the Middle East. Congregating organizations from all over the world and working closely with governments and all Christian denominations in the region, raising awareness, creating events, documentaries and above all, ultimate strategies to prevent this unfolding tragedy.

Help us to save the Christians of the Middle East!

HELP NOW!!!  Your donation is Tax Deductible in the United States under the Internal Revenue Code 26 U.S.C. § 501(c) 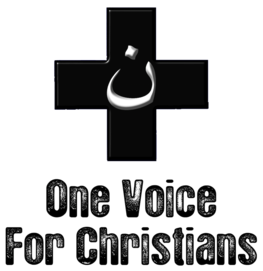