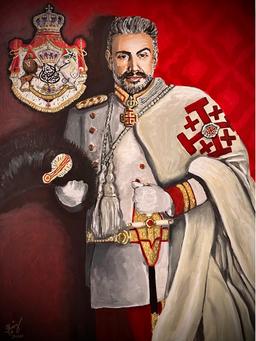 Al-Numan Gharios El Chemor (nee. Ahnume Guerios, the Portuguese transliteration of "Al-Nu'Man Gharios") was born in Brazil on 29 September 1973. Is the Sovereign Prince of the Arab Dynasty of the Ghassanids, writer, scholar, humanitarian, artist and master of martial arts.

Is internationally recognized as the heir of the Ghassanid Dynasty, descendant and heir of Christian Arab Kings, Byzantine Emperors and also from the Lebanese Sheiks Chemor. His ascendants ruled from biblical times in Yemen until 1747 CE in Lebanon. The titles of the El Chemor family were recognized by the Ottoman empire until its end (1924 CE) and also by the Lebanese republic until the present date. The family's history was kept and validated for centuries by the Maronite Church under the Holy See (Vatican) and the authority of the Pope. Please CLICK HERE  for an official 2014's article (in Arabic) from the Lebanese Government New's Agency (Lebanese Republic - Ministry of Information) recognizing the titles and validating the book written in 1947 about the family's history.

His legal name and titles: His Imperial & Royal Highness Prince Gharios El Chemor of Ghassan Al-Nu'man VIII. His Royal rights and titles were recognized by the International Arbitration Award number 0413/2011 that, according with the Brazilian Federal Law number 9307/96 has the very same legal force as a Federal Court Verdict and according with the "1958 NY Convention on Arbitration" is a legal binding court decision in 148 nations in the world. Even being already "res judicata" (matter already judged not subject to appeal) by Brazilian Law, the International Award was recognized and enforced by the Los Angeles Superior Court in February 2012. (Los Angeles Superior Court Case Number BS-135337 of 02/24/2012). In 2013, Brazilian jurists (one Chief judge and two presiding judges) signed affidavits recognizing the legality of the international arbitration award and Prince Gharios' rights and titles.

He studied 10 years of his education at the Franciscan Catholic School called Bom Jesus. Since his 11 years old he became interested in extracurricular subjects, becoming knowledgeable in many areas, having already made national and international conferences on various topics such as culture and Eastern philosophy, anthropology and comparative religion, history, unexplained phenomena, etc..

Has received several 'Honoris Causa' Doctorates. Was invited as visiting professor in several institutions, including the Catholic University of Parana State. Also attended College at FATEC International / IBEPEX studying Marketing and Propaganda. Wrote the only specific book about Dynastic and Nobility Law in English today, "The End of a Myth", with forewords by eminent jurists and diplomats. Also wrote the book "Middle East - The secret History and Possible solutions" awarded in Italy in 2014.

Is Roman Christian but at the end of the 80's had his first contact with Buddhism. Initially studied Zen and later became in involved with the Order of Tibetan Buddhism Nyingma-pa (red hats). Considers as his guru (teacher), His Eminence Chagdud Tulku Rinpoche, from whom he received many teachings and initiations. Considers the Buddhism as a philosophy, not a religion.

In 2013 was appointed as a Board Member for the Monaco Film Festival. In 2015, was named Member of the Honorary Committee of the Asian World Film Festival.

In 2014, received United States Special Congressional Recognition and was invested as a Knight of the Pope (Vatican) in the Equestrian Order of the Holy Sepulcher of Jerusalem. One of the oldest, most respected and recognized Orders of Chivalry in the world.

In 2017, has received the US Presidential Award for Volunteer Service and his second United States Special Congressional Recognition and also the title of Goodwill Ambassador of the State of Arkansas-USA (Arkansas Traveler).

In 2018, had his titles recognized by the world's leading scholar on Middle Eastern Royal succession, Prof. Dr. Joseph Kechichian, PhD by a sworn legal document.

In 2019, was promoted to "Knight Commander" in the Papal Chivalric Order of the Holy Sepulcher of Jerusalem. In the same year, the Royal House of Ghassan  was officially recognized by the Government of the Lebanese Republic by Presidential Decree.

In 2020, had all his titles recognized officially by the Global Imams Council world's largest non-governmental body of Muslim leaders (both Sunni and Shia) with the participation of over 1,000 (one thousand) Muslim clerics from all over the world.

​Is the founder and CEO of Tyche-Fortuna Enterprises a company specialized in entertainment & marketing  (consulting and production).
Is fluent in four languages: English, Portuguese, Spanish and Italian. Speaks also the basic Japanese, French and Arabic.

* IMPORTANT: The surname “Al or El Chemor” (in Arabic الشمرّ) has many other transliterations: Shamir, Shammar, Shoumar, Chemr, etc.

The Forefather of the modern Ghassanids